August 25 will never be an easy day for many music fans across the world, particularly for those who love the late R&B icon Aaliyah Dana Haughton.

On August 25, 2001 we lost such a beautiful soul. Today we celebrate 18 years without you baby girl, we love and we miss you. #Aaliyah

Since 2001, this day has marked the anniversary since our beloved Princess of R&B and Queen of Urban Pop was killed in a plane crash after filming the music video for “Rock the Boat” off her perfect self-titled album, Aaliyah. The serenity of the beat paired with her light-as-a-feather vocals, even with its suggestively coy lyrics, have stood the test of time as one of the most beautiful R&B videos of all time, while also being one of the most heartbreaking as well.

Granted, she was a beast on the soul tip, but Baby Girl was also one of the premiere R&B divas who had no problem riding a Hip-Hop beat with syncopated bliss. Much like her ’90s predecessors Mary J. Blige and Mariah Carey, Aaliyah brought out the softer side of the street and could hold her own next to some of the hardest rappers during her era of reign. So, while we’ll always remember her for being a soul siren with the voice of an angel, The Source decided to take the 18th anniversary of Aaliyah’s untimely passing to give you all 25 of her illest rap collabs and remixes.

From making sure DMX made it back in one piece, to getting a fresh-out-of-jail Slick Rick on a Marvin Gaye cover, let’s look back at Aaliyah as a Hip-Hop star: 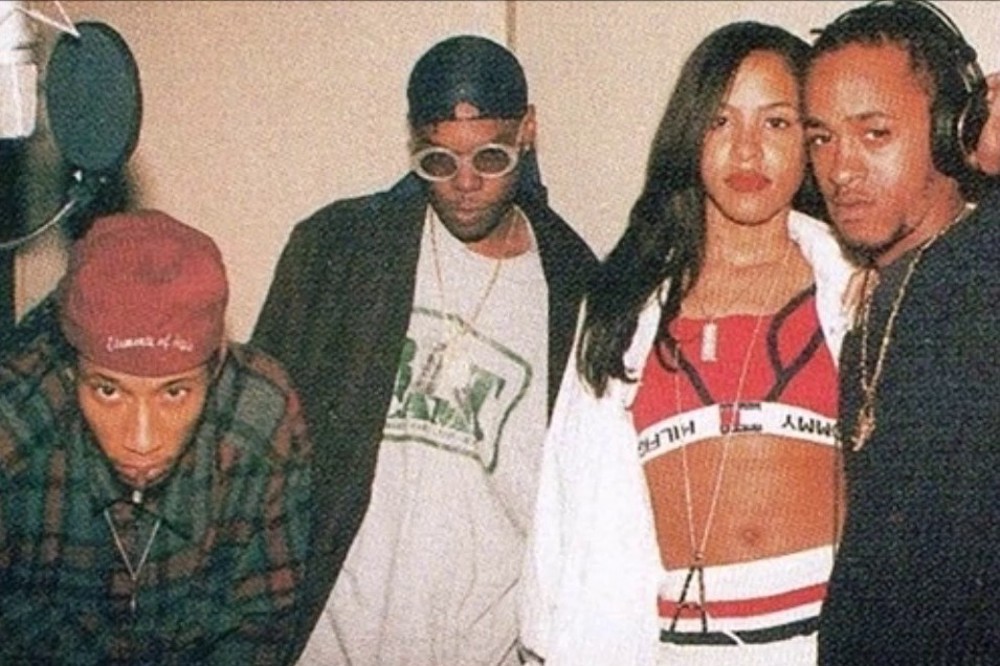 25. “If Your Girl Only Knew” (The New Remix) [featuring Missy Elliott]

A good argument for why it made perfect sense in the ’90s to buy both the album and single releases. This ‘Missy mix’ of Aaliyah’s chart-topping 1996 hit record absolutely slaps.

It’s a bit tough to get through the Age Ain’t Nothing But a Number era without mentioning R. Kelly, given all that’s come to light this year, but it just doesn’t make sense to ignore Aaliyah’s musical legacy from her beginning years in order to #MuteRKelly. Some songs, like this deep cut remix, prove that she’s so much greater than the producer behind and on the record.

Silky and smooth vocals from the queen, paired with a few bars by Timbo to give the hard-hitting beat a proper rap component. This was always a sweet spot for the “Timbaliyah” duo.

Here’s a G-funk remix by British producer Linslee Campbell that most fans have probably never even heard. Yeah, you’re welcome!

Yep, we took it there! As the sole posthumously-released collaboration on this list, we had to show “Enough Said” and Drizzy some love for keeping Baby Girl’s legacy alive over a decade after her death.

When Missy and Aaliyah jumped on a track together, it always resulted in a smooth banger. This cut off Timbaland’s 1998 album Tim’s Bio: Life from da Bassment proved to be no different.

This unreleased collab has reached almost mythical status. Even though most people have no idea who Yaushameen Michael is — she was a minor member of the Bassment Crew that even landed a feature on Tim’s Bio: Life from da Bassment (1998) — it didn’t stop Aaliyah from getting on a record with the unsung femcee. “Girlfriends” was originally recorded for Aaliyah’s 2001 self-titled album as a way for her to officially introduce the world to Yaushameen. Due to many circumstances, the ultimate one being Aaliyah’s passing, this collab never saw the light of day until it leaked back in 2006.

Nothing beats the first time! On her debut single, which topped the R&B chart and peaked at no. 5 on the Billboard Hot 100, Aaliyah proved from the beginning that she was a b-girl at heart.

One of the hardest tracks off the Romeo Must Die soundtrack, “Are You Feelin’ Me” is still a peak Aaliyah/Timbaland era beat. This one just further solidifies the void in pop music we’ve been feeling for the past 18 years that only these two could fill.

Young Liyah with a baby-faced Kim and the Junior M.A.F.I.A. crew, who were also more than likely teenagers at the time. Young Nation, indeed!

Aaliyah, Missy and Timbaland. Need we say more? Definitely blast this one at high volume!

Even though Aaliyah’s vocals are carried over from the original Billboard Hot 100 No. 1 song, and the bars by Sabastian And Sin are a bit forgettable, Timbaland’s added extensions to the beat toward the beginning and end make up for the lyrical shortcomings.

13. “Down With The Clique” (featuring Tia “Second Chapter” Hawkins)

While the circumstances behind Tia Hawkins’ story are heartbreaking in itself to say the least, reflecting back on the good times will always soften the blow of hard times and tribulations. Her work as a rapper on “Down With The Clique,” in addition to many other songs on the Age Ain’t Nothing But a Number album, make for worthy recognition in a positive light. Wherever you are, we’re praying for you Tia!

One of the chillest deep cuts off Aaliyah’s classic 1996 album One In a Million. Definitely something that both the ladies and fellas in the house can always groove to.

Even though Aaliyah and Biggie make light contributions to this Hard Core standout, it’s still dope to think that Kim had two music icons on a radio remix for the streets. Respect to the Queen!

The back-and-forth flow between these two made for a super fun record overall. Also, the fact that fellow Naughty By Nature member Kay-Gee produced this One In a Million album cut is an added bonus.

Aaliyah is so silky on this record, even though she’s simply cooing on the chorus. This record will always make us wonder how she would’ve fit into the So So Def family if things had played out differently.

8. “We Need a Resolution” (featuring Timbaland)

Looking back, this song was the literal example of the term “ahead of its time.” It barely made a blip on the Hot 100 back in 2001 — it peaked at no. 59 — but “We Need a Resolution” would’ve been a surefire hit had it been released in today’s more experimental musical climate.

What’s interesting about this collaboration is that Slick Rick recorded this while on work release from prison, in addition to Aaliyah being brave enough to cover a ’70s soul classic with satisfying results. Now that’s gangsta!

The ultimate female empowerment record, done effortlessly by three Hip-Hop queens of the ’90s. There’s nothing better than hearing the union between women who rock with each other both on and off wax.

What a tune! As posse records go, this was an apex moment for the Bassment Crew. Everyone played their part perfectly, and the music video is still a great look at one of the best musical families to ever do it.

While Buckshot & Boogie Brown’s original remix for Boot Camp Clik’s 1997 album For the People was fire in itself, 9th Wonder absolutely laced this version. Aaliyah of course is as smooth as ever, proving yet again that she can hold her own with the hardest MCs.

We still can’t believe this song didn’t get an official release with a proper music video! The God Nasir and the Queen Aaliyah make for a dream team on this I Am… standout cut, produced by none other than Timbo the King.

When considering joint albums by the likes of Jhené Aiko and Big Sean (Twenty88), or a more accurate comparison like The Carters themselves Jay-Z and Beyoncé, DMX and Aaliyah would’ve made a pretty solid collaborative LP had fate given us more time with Baby Girl. Given this classic cut off the soundtrack for Romeo Must Die, the 2000 film which stars both musicians, we can only assume that it would’ve been a definite hit.

1. “Are You That Somebody?” (Supafriendz Remix) [featuring Danja Mowf, Mad Skillz & Lonnie B.]

One of Aaliyah’s greatest rap moments ever was this massive remix to her even more massive 1998 hit record off the Dr. Doolittle soundtrack. The streets couldn’t get enough of this version, and Timbaland’s insanely iconic beat didn’t even need to be touched. Simply put, there will never be a singer that meshes so well with Hip-Hop quite like this dearly missed R&B queen.

Rest in peace forever, Aaliyah! Let us know how you’re remembering the dearly missed R&B icon today by letting us know over on our Facebook and Twitter!